Embark on a Christmas adventure through Europe

Discover the Christmas markets of Europe

Originating in Germany and dating back as far as the late middle ages, Christmas markets, or Christkindlmarkt as they are also known, have in recent years become popular throughout Europe.
The waft of delicious mulled wine and roasting chestnuts, along with a backdrop of festive sounds and twinkling lights ensure the air is filled with delightful Christmas-time cheer. Remaining true to their roots, many stall-holders at these wonderfully festive markets are local trades-people selling hand-crafted gifts and decorations, along with a delicious array of seasonal food to tempt you. From sizzling bratwurst and candied toasted almonds to Christmas cookies known as Lebkuchen, not forgetting the fruity festive favourite, stollen.

Popular attractions across these wonderfully festive markets include the obligatory huge Christmas tree, lit up in all its glory, along with a Nativity scene and festive singing and dancing. Full of festive charm, these markets are truly a joyful treat for all the senses. Late November and early December offer the opportunity to embark on your very own Christmas-time adventure with Emerald Waterways. Explore the Christmas markets of Europe with our specially tailored itineraries from 5 to 15 days, experiencing different festive celebrations in several cities during one trip. 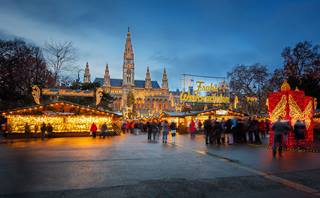 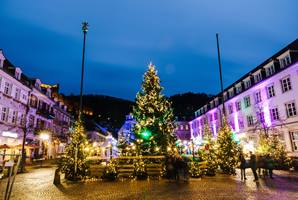 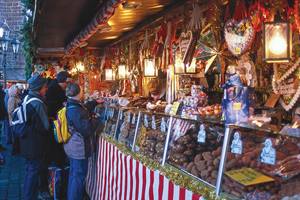 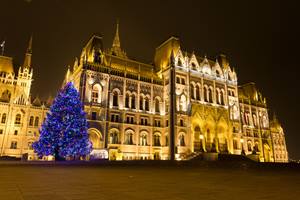 The Schönbrunn Christmas and New Year's Market in Vienna runs from the end of November until Boxing Day and attracts thousands of visitors every year to its stunning location in front of the famed Schönbrunn Palace. The Christmas Market is often followed by the New Year’s Market Daily choral performances, gospel groups and brass bands will act as the musical backdrop to your Christmas shopping while jazz sounds will fill the air throughout the New Year’s Market.

Christmas Time on the Danube
Vienna to Budapest
5 Days
From (NZD) $ 3,090
Nuremberg Christmas markets
Christmas Markets on the Danube
Munich to Budapest
An unforgettable cruise down the iconic Danube & through the heart of old Europe. Walking tours, invitations into the homes of locals & sightseeing excursions showcase the magnificence of yesteryear.
8 Days
From (NZD) $ 4,325
Over two million people visit Nuremberg every year before Christmas because of its reputation for being one of the best markets of its kind in the world. All of the best parts of a German Christmas Market can be found in at the Nuremberg Christmas market, Christkindlesmarkt,  including spiced gingerbread, Christmas tree decorations, festive lights, mulled wine and an old-fashioned carousel.

Around 180 stalls appear at the market, all of which are carefully monitored by Nuremberg's own Christmas Market Council. They make sure that no mass-produced toys, non-stop Christmas chart music or cheap plastic decorations are found on any of the stalls. When it comes to a traditional German market, it doesn't get much better than Nuremberg.

Keep a special look out for the famous 'Nuremberg Plum People', which are little figurines made from dried plums and be sure to attend the world-famous opening ceremony, which is an impressive event, both for Nuremberg inhabitants and tourists from Europe and abroad.
Cologne Christmas markets

Offering seven German Christmas markets in total from its location beside the River Rhine, Cologne is an ideal city to visit for those who are looking for a festive river cruise in Europe. One of the biggest markets has Cologne Cathedral as a backdrop and is a must for those seeking a festive atmosphere. Visitors can purchase a decorative Christmas mug of original 'Christmas Mulled Wine', and are sure to be tempted by the masses of stalls selling Lebkuchen (German Christmas gingerbread), Stollen (German Christmas cake), Wurst (German sausage) and other tasty treats.

The Christmas Market in the Old Town is also worth heading to, where legend has it that the famed Heinzelmännchen gnomes ensure that no modern or mass-produced goods are sold. Neumarkt is best suited to those looking for high-quality, luxury products and the 'stars at night' theme makes it one of the prettiest German Christmas markets in the country.

Christmas Markets on the Rhine
Amsterdam to Basel
Architecture, history and natural beauty are ever-present on this wonderful journey down the Rhine, beginning in the Dutch capital and sweeping up Cologne, Koblenz and the Black Forest on its route.
8 Days
From (NZD) $ 5,738
Budapest Christmas markets
Christmas Time on the Danube
Vienna to Budapest
5 Days
From (NZD) $ 3,090
The Hungarian capital comes to life with the twinkling of lights, market stalls and general festivities in December. There’s something undeniably magical about the setting of Budapest’s main Christmas markets in front of the city’s grand St Stephen’s Basilica cathedral. Pop on a pair of ice skates and visit the skating rink outside the church; the magical, atmospheric surrounds act as the perfect wintery backdrop. St Stephen’s Square has also become synonymous with a fantastic light show, illuminating the church’s classical domes.
Vörösmarty Square is another must-visit hotspot for Christmas markets. Warm up with a steaming cup of wine and a pastry. Sample the finest traditional confectionery, including kürtőskalács (chimney cake), warm honey cookies (Hungarian gingerbread) and Jewish flódni cake (five layers of fruit and nut filling). If you have more of a savoury tooth, try dödölle (fried potato dumplings) or lángos (deep fried dough). You’ll also find handcrafted trinkets and folk-inspired ornaments from the many craft vendors.
Rüdesheim Christmas markets
Set on the banks of the Rhine River, Rüdesheim is another great German Christmas market to head to if sailing on a Christmas Markets of Europe river cruise. The town's old quarter is the perfect setting for an idyllic German Christmas market, but variations of the traditional style can be found here. Over 100 stalls are located on Drosselgasse lane, many of which offer a multicultural approach to Christmas shopping; try specialty Mongolian food or purchase a Finnish treat to take home.

Many people will describe Rüdesheim Christmas Market as one of the best in Europe for its famous Rüdesheim Coffee. The coffee is served in a special Rüdesheim coffee set and is made with whipped cream and locally distilled Asbach Uralt brandy. This brandy can also be found in chocolates that would make a wonderful gift to take home, and it is also available in bottles if a brandy lover appears on your Christmas shopping list.
Christmas Markets of Europe
Budapest to Amsterdam
15 Days
From (NZD) $ 6,670
Call our Cruises Experts on 0800 330340 to secure your place or
Request a Brochure

Christmas time on the Danube
Budapest to Vienna
5 day
From (NZD)
$ 3,090
View Cruise

Christmas Markets on the Danube
Munich to Budapest
An unforgettable cruise down the iconic Danube & through the heart of old Europe. Walking tours, invitations into the homes of locals & sightseeing excursions showcase the magnificence of yesteryear.
8 day
From (NZD)
$ 4,325
View Cruise

Christmas Markets on the Rhine
Basel to Amsterdam
8 day
From (NZD)
$ 5,738
View Cruise