An Artists’ View: Provence Through the Eyes of Cezanne and Picasso

Charming Provence - a patchwork of farmhouses, fields, canals, orchards and ancient ruins – has drawn in painters, writers and travellers for centuries. Our vision of this storybook region in the South of France has been shaped by artists whose works of art were inspired by its beautiful landscapes. Cézanne, Picasso, Van Gogh, Matisse, Renoir and many more drew on the rich golden light and dramatic shadows of what Cézanne called his "promised land" as influences for their work. 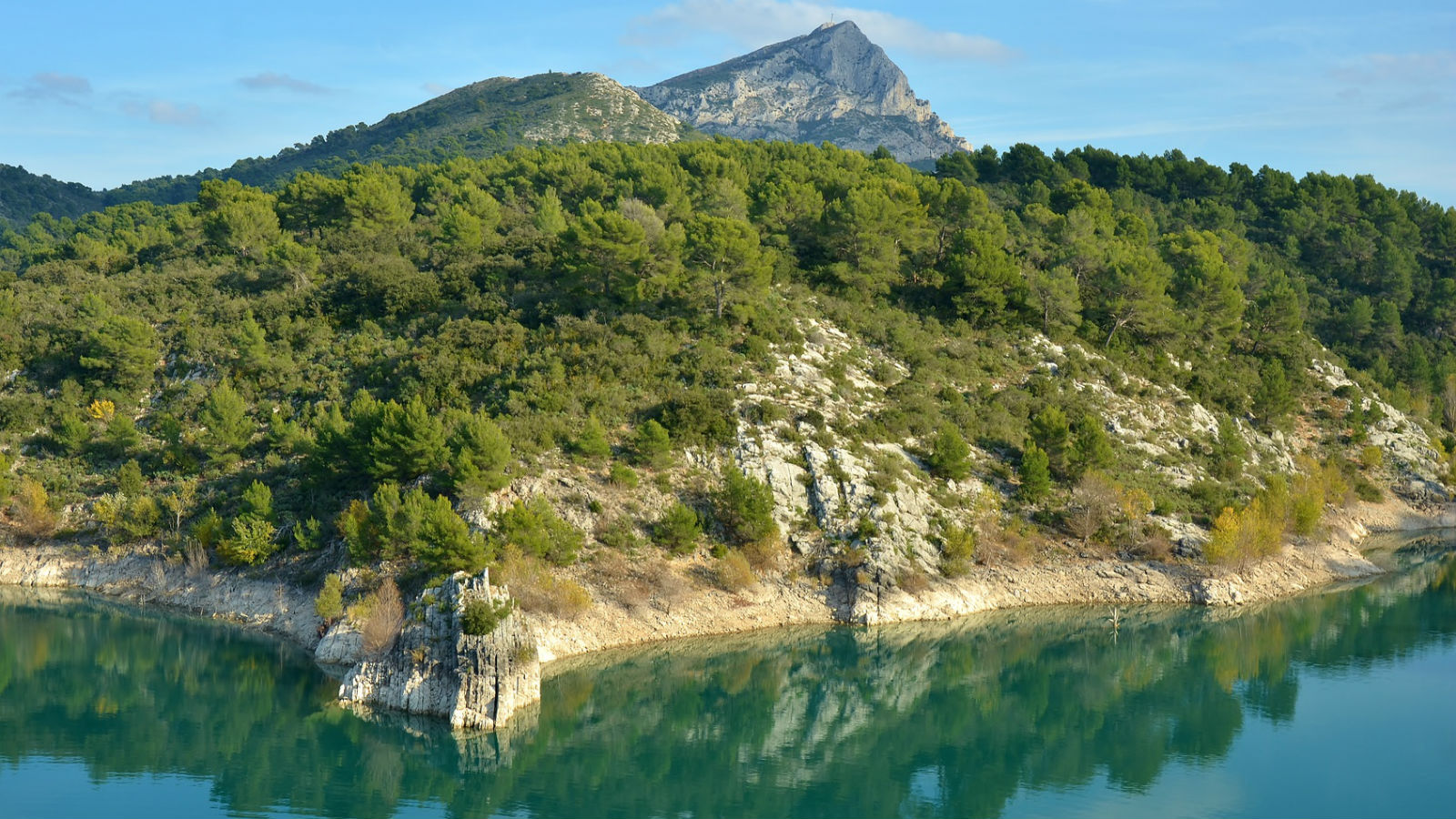 Paul Cézanne was born in Aix-en-Provence in the South of France, just a short distance from the limestone mountain ridge Mont Sainte-Victoire with which he became obsessed. He said, "When one is born there, he is ruined, nothing else means anything to you."

The best way to see this area through Cézanne’s eyes is to take his favourite route, ‘Route du Tholonet’ (or Route Cézanne), an elegantly-signposted winding trail that takes you in the direction of the pretty town of Gardanne. Cézanne lived there for a year when his son was born and because he was not married to his son’s mother, he kept the relationship secret. Cézanne’s paintings of the town show its signature red-roofed buildings on a sloping terrain, crowned by the local church. The structures are depicted in a faceted and geometric style, anticipating early-twentieth-century Cubism.

As you go along Route Cézanne, note the umbrella shaped trees that feature in some of his paintings – ‘The Great Pine’ for example – and the many buildings he depicted in his works high on the hill above. You’ll also see the inspiration for his painting of Château Noir which he positioned in the distance, framed by the branches and foliage of the deep shadowy trees.

After the Château, you’ll see the road descend into Le Tholonet, a small village that was one of Cezanne’s favourite haunts. Its distinctive grey rock, red soil and impressive blue sky gave Cézanne a palette of magnificent colours to work with.

Take a moment to soak up the breath taking views from Le Tholonet over the mountain and surrounding countryside which are nothing short of exquisite. La Cause and the River Arc cross the picturesque scenery, winding between fields of wild flowers and vineyards to create a picture postcard view so spectacular that it simply can’t be captured through a camera lens.

Le Tholonet is home to the old stone windmill which is now used as a small art gallery. From here, you can see where Cézanne first painted Mont Sainte-Victoire and appreciate why he completed a staggering 87 paintings of the mountain during his lifetime (43 watercolours and 44 oil paintings). The picnic tables provide a place to rest and take in the view – you’ll notice that where the earth has been ploughed, it matches the colour of the red-orange rooftops.

Cézanne often frequented the Restaurant Berne at Le Tholonet and the table where Cézanne sat is still there in the corner. The restaurant has now been renamed Relais Cézanne and is an elegant affair in a pretty location with attractive views. You can visit the restaurant in the evening from March through to late May, or for lunch or dinner from June to September.

Track back to the main road and find the park sign that announces the start of a trail which leads to Cézanne’s cabin at the Bibemus Quarries. The small brick structure with its fiery red door was a favourite spot for Cézanne to paint trees and boulders. You’ll see some extraordinary natural architecture here across the seven-hectare site which will help you to appreciate how the birth of cubism came about. A visit provides a deep insight into Cézanne’s creative process, from composition and geometrical approach to viewpoints, colours and motifs.

Another point of interest here is the Jas de Bouffan where Cézanne lived and painted for forty years of his life. Walking around the grounds, you can see some of the spots where Cézanne set up his easel and produced 54 of his paintings depicting his surroundings. Various features of the gardens that feature in his work have remained exactly as they were when Cézanne would have seen them.

Take a detour 30 km south and you’ll reach the small port of L’Estaque, another location that provided Cézanne and many other painters with inspiration for their work. Here, Cézanne lived and worked intermittently between 1864 and 1885, and in 1882, Renoir painted “Rocky Crags at L'Estaque” with Cézanne at his side. Take the Painter’s Path from the port jetty for stunning views over the bay of Marseille and an insight into why so many artists loved and worked in this area. Cézanne’s paintings of the Midi were an inspiration to many artists, including Picasso who referred to Cézanne as “the father of us all”. Although the artists never worked together – there was 42 years between them - Pablo Picasso bought several of Cézanne’s paintings for himself and eventually purchased the Château of Vauvenargues, a 17th Century castle located on the Northern slopes of Mont Sainte-Victoire. Of this, Picasso said: "I have just bought myself Cézanne's mountains”. Although Picasso didn’t have the funds to purchase the entire mountain, he did buy up hundreds of acres that spread over its northern slopes leading up to the edge of Vauvenargues, a tiny village. However, unlike the light-drenched southern parts of the mountain that Cézanne fell in love with, Picasso’s northern side was characterised by densely woodland and shadows. When his old friend and art dealer Daniel-Henry Kahnweiler saw the chateau, he remarked that it was "too vast and too severe." Picasso replied that he would fill the chateau’s halls with art, remarking: "You forget that I am Spanish and I love sadness."

Like Cezanne, Picasso had a love affair with the South of France and spent the last 30 years of his life there. Moving through the region – from Mougins to Cannes to Aix-en-Provence and back to Mougins – Picasso left his art and reminders of his life everywhere he went. He lived in his chateau in Vauvenargues from 1958 to 1965 with his second wife Jacqueline Roque and like Cézanne, he produced countless beautiful paintings that drew on his surroundings. Notably his work ‘Nude under a pine tree” was set against a landscape from Mont Sainte-Victoire. However, it is perhaps Picasso’s awe of Cézanne’s work that stopped him from trying to paint the beloved mountain itself. Picasso’s depictions of the landscape from Vauvenargues were painted with his back turned to the mountain, facing instead towards the village. Although he died in Mougins, Picasso was buried at Vauvenargues – a decision made by Jacqueline. His remains, and those of his wife, are at the chateau which is now owned by Jacqueline’s daughter from an earlier marriage, Catherine Hutin. His tomb is marked by his sculpture, ‘Woman with a Vase’ – which he created with Marie-Thérèse Walter in mind, his mistress and eventually the mother of his first daughter. It is Jacqueline who had the sculpture placed symbolically on his grave, marking an otherwise unremarkable resting place for this great artist.

The Château of Vauvenargues could not be visited by the public until 2009, after which it was opened selectively. Small groups were given access to Picasso's studio which remains intact with his paints, brushes and arrangements for still-life untouched. Now it would seem that the doors have been closed once more, but views of the striking red brick building with Mont Sainte-Victoire in the background can be seen from afar.