The Bavarian town of Passau is lovingly referred to as Dreiflüssestadt or ‘City of Three Rivers’, due to its favourable position where the Danube is met by the Ilz to the north and the Inn to the south. This location at the confluence of three rivers granted Passau its unique appearance and rich history – having served as an influential part of the Roman Empire for many years.

Lining the three picturesque rivers are a series of brightly-coloured baroque and gothic houses, cathedrals and fortresses, creating a unique fairy tale-like appearance. Exploring Passau by foot can seem like stepping into a Brothers Grimm folk tale, with hints of magic lining every street and lighting up every building.

Despite the town’s population now being dominated by the large student population, Passau remains fiercely proud of its past, with historical buildings carefully restored and maintained, exuding their beautiful personality upon the ancient streets. A slow and relaxed way of life dominates Passau, making it a hugely pleasurable town to explore by foot. 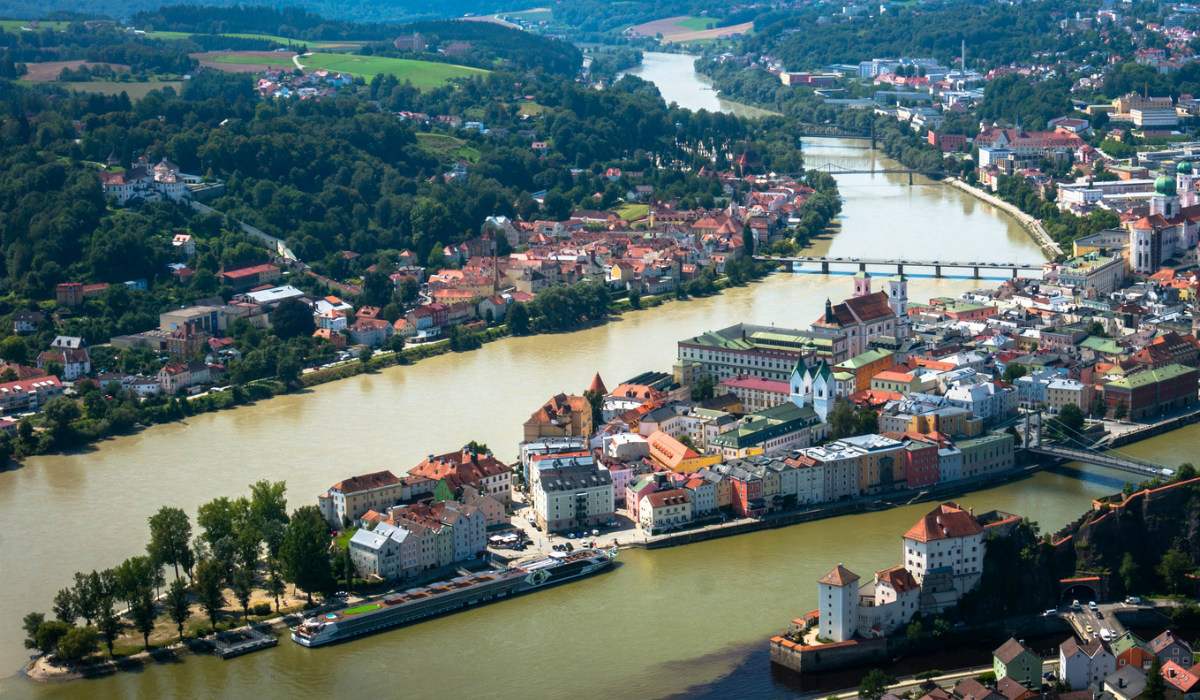 Three Emerald Cruises river cruises (Danube Delights, Splendours of Europe and Classic Prague with Danube Delights) call in at the wonderful old town of Passau, each offering an unforgettable walking tour. Here are just a few of the highlights of a walking tour of fairy tale Passau.

Immediately transporting you back to an age when Passau was a key part and the largest diocese of the Holy Roman Empire, the winding cobblestone streets and narrow alleyways are packed with period character and charm. Buildings are cobbled together without uniform, vying for space overlooking the ancient streets. There is a distinct Italian character to many of the buildings, with many painted rose or pastel shades of yellow, orange and blue. Wrought iron railings wrapped around second, third and fourth-storey windows serve as make-shift flower boxes, adding further colour and life to the town’s streets.

The sweeping archways of the ancient town walls and fortifications curve high above these narrow alleyways, and passing through opens up more charming streets dotted with small shops and delightful cafes. Follow these quaint byways long enough, and you’ll eventually reach the impressive Oberhaus Fortress.

Perched above much of the town of Passau, the Oberhaus Fortress sits as proud today as it did when it was first built in 1291. Looking out over the Danube, the fortress was built as the stronghold of the Bishop of Passau, built by Ulrich II, the very first prince-bishop of the town. A show of arms, the fortress was designed to demonstrate the strength of Ulrich II and cement his status within the Holy Roman Empire. 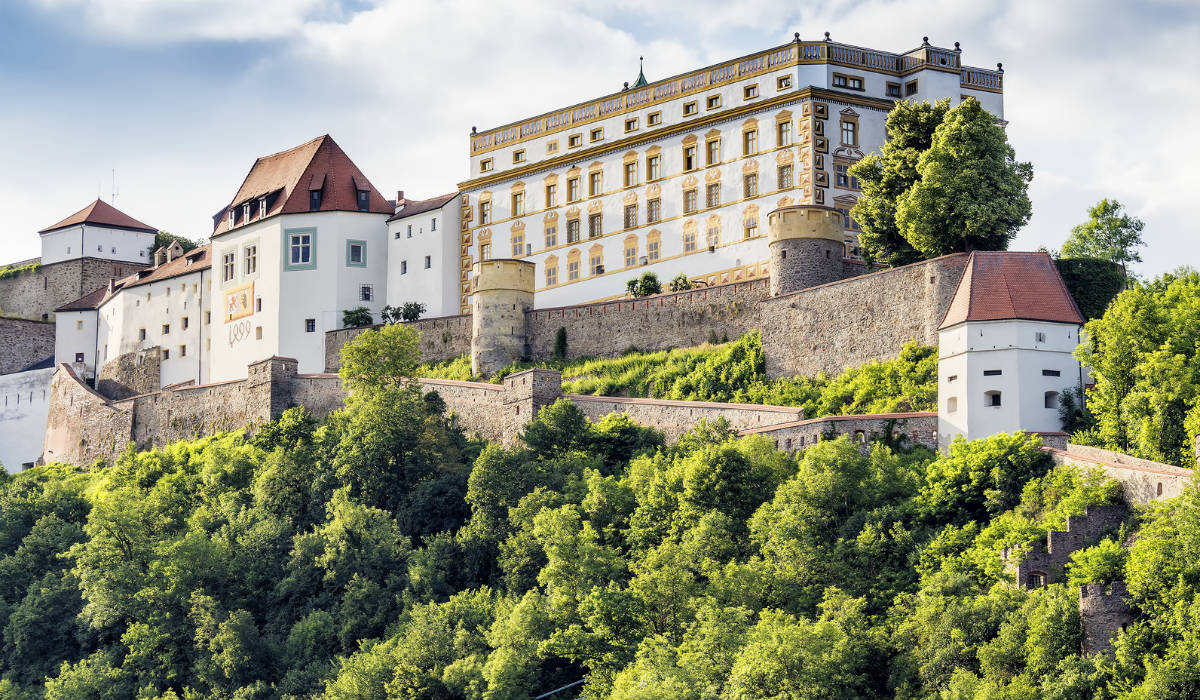 Protecting the citizens of Passau, Oberhaus Fortress was repeatedly updated and upgraded to repel continually-evolving siege tactics and weaponry. This has led to the fortress boasting gothic, renaissance and baroque architectural flourishes, a fascinating sight for the first-time visitor.

Today, the fortress offers wonderful insight into Passau’s history, both inside and out. Home to a museum and gallery, there’s a huge selection of outstanding exhibitions including artworks from Eastern Bavaria, Bohemia and Austria, as well as a fine porcelain collection.

A large open-air theatre is also location on the site, so you might just get lucky enough to catch a performance whilst touring around this beautiful, ancient fortress.

While all of Passau is technically old, the recognised Old Town is home to many fascinating sites and structures. Unsurprisingly, much of the Old Town of Passau is located around the river banks of the town, making them easy to access from a river cruise. Architectural highlights, charming shops and cafes, and the busy, friendly locals of Passau, add real character to the Old Town. Stepping through the streets, try to sample the local confectionary – a wonderful example of the finest delicacies produced by the famously sweet-toothed nation.

One of the highlights of the Old Town is the stunning Glass Museum, part of the 14th-century Wilder Mann building. Combining gothic and baroque architecture, the beautiful exterior will prepare you for the decadent and delightful wonders housed within.

A tour around beautiful Passau is not complete without visiting the majestic 17th-century baroque church, St. Stephen’s Cathedral. Home to Europe’s largest organ and elaborate interiors, the awe-inspiring church is an absolute spectacle with incredible stone masonry, detailed murals and golden flourishes everywhere you look.

The seat of the Catholic Bishop of Passau, St. Stephen’s Cathedral is positioned on the site of numerous churches dating back to 730. The current church, completed in 1693, is over 300ft long and home to eight bells in the north and south towers. 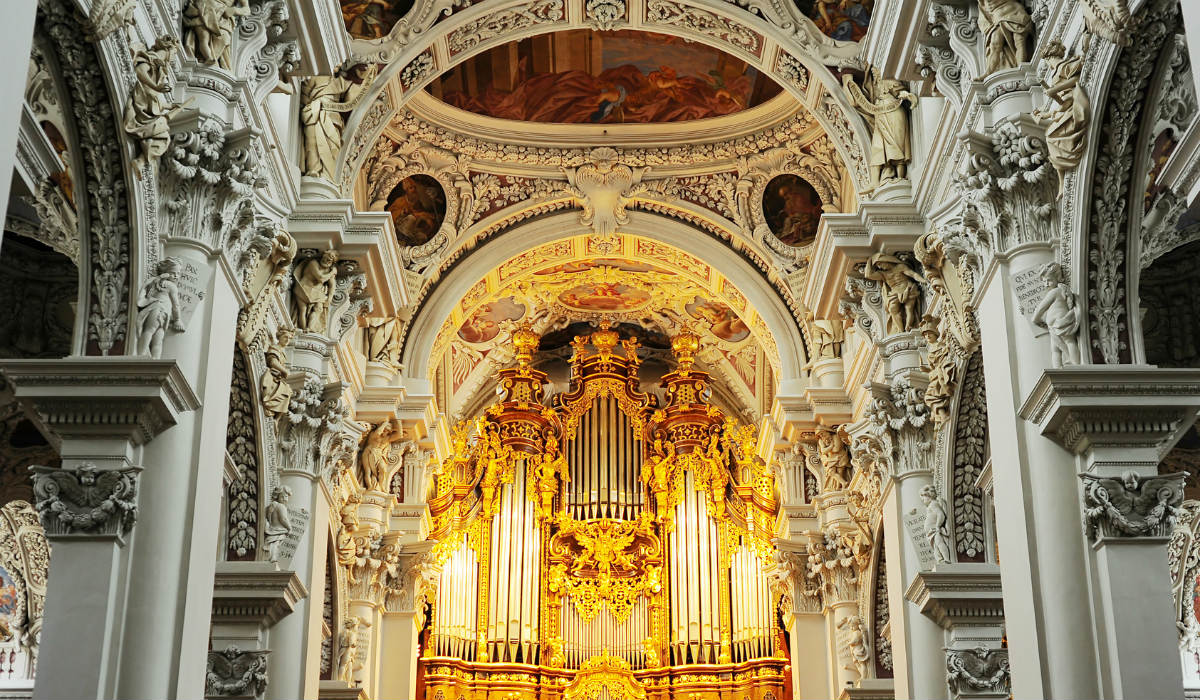 The church’s organ itself is more than worth a visit, made up of 17,774 pipes and 233 registers, all of which can be played from the general console. Despite this, the organ is actually made up of several smaller organs which have been added to the console over the years. Perched front and centre in the church, the organ is the eye-catching centrepiece of St. Stephen’s Cathedral. If you’re lucky, you may just catch a musical performance, played at noon almost every day between May and October.

Like all Emerald Cruises shore excursions, a knowledgeable local guide will be on hand to inform and intrigue, providing a wonderful background to the history of Passau and the importance of the sites visited.

For the full selection of Emerald Cruises cruises exploring the fairy tale cities and towns of the historic Danube, visit our dedicated Danube river cruises page, or call our friendly sales team on 0800 330 340.